The ascent up Wilburn Ridge is the most spectacular hike in Virginia.  I usually avoid superlatives in describing the outdoors, because descriptions such as “most spectacular” are of course necessarily subjective.  However, in many years of hiking across the Commonwealth, this route remains my personal favorite.  If you are reasonably fit and only do one hike in Southwest Virginia, this should be it.

This hike is one for all seasons:  Spring, summer, fall and winter each bring a different hiking perspective.  Because of the elevation, the winters can be harsh up here, and summer comes later than it does to the valleys.  In the middle of June, the balds boast the largest open rhododendron thickets in Virginia.  In the fall, the trees burst forth with color.  The peak brilliance of fall foliage occurs several weeks earlier here than in the rest of the region—usually the last week of September or first week of October.

These photos were taken on a day hike on Memorial Day Weekend in 2011.  Some the trees were still in the early leafing out stage that has long past the rest of the Virginia.  This provided an interesting contrast between the lighter greens of early foliage and the darker colors of the Fraser firs that are spread across the higher elevations.

The following photo taken of hikers ascending Wilburn Ridge shows the grand views from practically the outset of this hike.  Click on this photo to enlarge it and appreciate the expansive views into North Carolina along Wilburn Ridge. 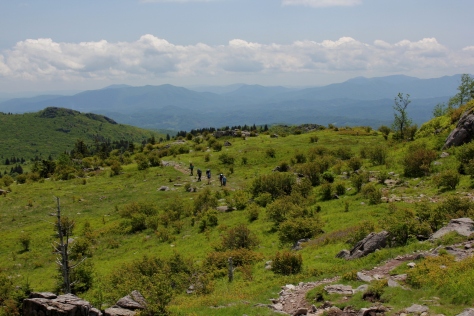 Most of Wilburn Ridge is above treeline in “balds,” huge sections of the mountain where there are only grass, underbrush, and rocky outcroppings.  This is more like hiking in the Western mountain ranges than anywhere else in the Southeastern United States.

Wilburn Ridge is a ridge climb that is the southern rampart of Mount Rogers, the highest mountain in Virginia at 5700′ above sea level.  The highest point on the ridge itself is approximately 5500′.  The rock outcroppings rise like embattled parapets on a castle as you ascend the ridge.  From the northern part of this ridge the Appalachian Trail continues west across additional balds towards the true peak of Mount Rogers, and there is a short spur trail that ascends the final 200′ to the summit.  The actual summit of Mount Rogers is forested and has no view.

The trails surrounding Mount Rogers provide views in all directions.  There are some outcroppings that provide literal 360 degree views.  The further you ascend on this route, the better the views become.  In the midsection of the ridge, the views to the southwest show the Appalachian Range that separates North Carolina and Tennessee. 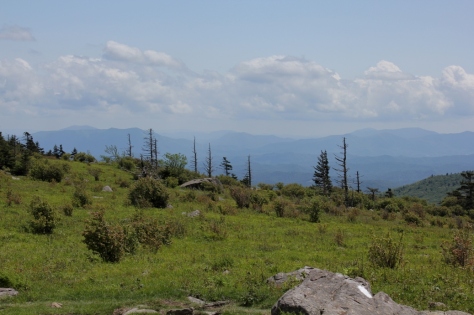 At the northern end (the highest end) of Wilburn Ridge, you can view almost 100 miles of the North Carolina-Tennessee state line.  Clicking to enlarge the photo below, you can see Grandfather Mountain in the foreground on the left side (about 1/4 from the left side).  It has a unique “U” shape in the middle of it.  The mountains in the middle include Sugar Mountain in North Carolina, while the largest mountains on the center-right hand side of the photo include Roan Mountain that divides North Carolina and Tennessee.

At the northern end of Wilburn Ridge, you can look west back down towards the valley and ridge section of Virginia.  In the photo below, you can see where the Appalachian Trail, Crest Trail, and Pine Mountain Trail intersect.  Click to enlarge this photo and you can see the horses and riders on the trail.  Iron Mountain is the long straight mountain behind them that runs along the top of the picture.  In the very upper left of the photo is the valley back towards Abingdon.  While not visible in this photo, Abingdon is less than 30 miles as the crow flies from this viewpoint.

To the north, Wilburn Ridge overlooks Pine Mountain.  As shown below, Pine Mountain appears as a semi-circular mountain that has huge bald sections but is also partially forested.  Pine Mountain has tremendous views itself looking back up to Wilburn Ridge and towards the southern mountains in North Carolina.  The Appalachian Trail traverses the entire ridge of Pine Mountain.  The Crest Trail can be seen on the left of the photo below.  Click to enlarge it for a more detailed view.

The views begin immediately climbing the trail.  The photo below was taken along the Virginia Highlands Horse Trail less than 1 mile from the parking lot in Grayson Highlands State Park.  If you click on it and enlarge it, the horse trail is clearly visible to the left-center of the photo, while the AT is just above it in the center of the photo.  These two trails parallel one another during the first 1.5 miles up Wilburn Ridge, until reaching the gate that separates Grayson Highlands State Park from Mount Rogers Wilderness.

The trail alternates between a series of rocky step climbing and traverses across fields.  Here is one of the fields showing rock outcroppings both near and far:

The following shows typical trail conditions while descending back down towards the parking lot: 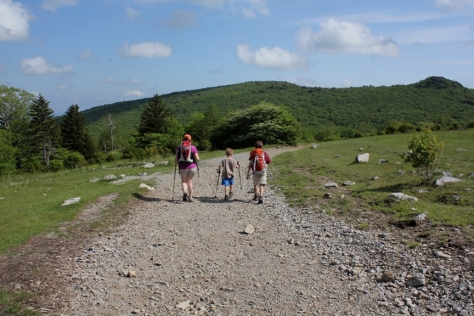 Wilburn Ridge and the surrounding area are known not only for the views, but also for the herds of feral ponies that live in Grayson Highlands State Park and in the high country or “crest zone” of the Mount Rogers National Recreation Area.  This is one of only two areas in Virginia where wild ponies roam (the other is almost 400 miles away on Assateaugue Island National Seashore).  The ponies here endure tremendous temperature changes from the heat of summer to the winters at 5000′.

The ponies graze across the high country throughout the summer, preserving the character of the balds.  In the winter they migrate to lowers areas of the park.  The ponies can be seen on the trails that crisscross the balds: 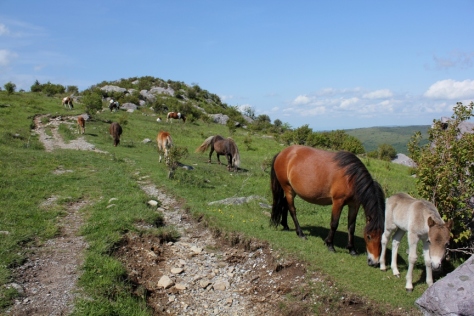 The photo below shows ponies along Wilburn Ridge.  The mountain in the distance is Whitetop.

The Wilburn Ridge Pony Association, a private organization, assists managing these animals.  In the spring some of the female ponies give birth, and in the fall the ponies are rounded up, and a certain number of them are auctioned off during the Grayson Highlands Festival.

The ponies are awesome to observe as you are hiking up the ridge.  While completely wild, they are not afraid of the hikers and usually continue grazing.  I have even experienced them waking up backpackers by grazing close to tents in the early morning hours.  Here is a mother with her young:

Here is another young pony up close: 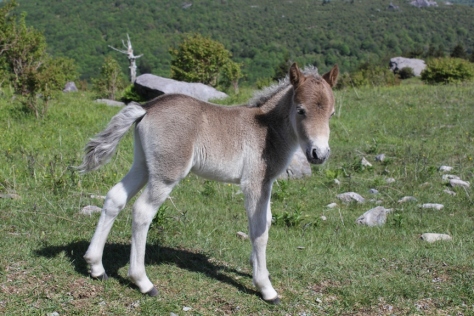 So there you have it:  The combination of views, miles of balds which provide above-treeline hiking conditions, wild ponies, and rugged country make this the most spectacular hike in Virginia.

From Abingdon, drive east to Damascus on Route 58.  Stay on Route 58 through Damascus.  Route 58 itself is a beautiful drive as it parallels Whitetop Laurel Creek.  You will continue on Route 58 east until you enter Grayson County; when you reach the community of Whitetop you have about 20 minutes left until you will reach the entrance to Grayson Highlands State Park.

There is a $3 entrance fee to drive into the park.  The drive to the Massie Gap parking lot is another 3 miles or so.

The best map for hiking in the high country that is currently published is the National Geographic Trails Illustrated Mount Rogers Map 786, available at the outdoor stores in Abingdon, Bristol, and Damascus.

One thought on “Virginia’s Most Spectacular Hike”